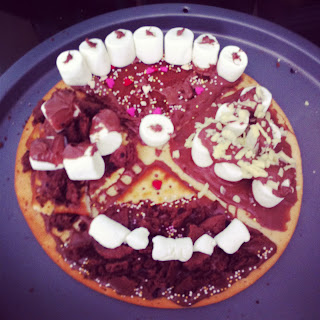 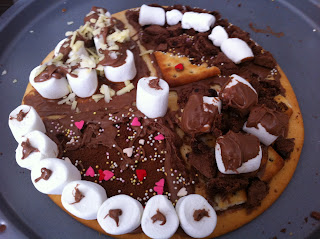 So, the bunch of us came together and made pizza for supper (It was suppose to be dinner, but everyone came late and we end up making pizza till 3am in the morning.) We had three different pizzas by the three boys since they haven’t made pizza before and so, I suggested that they have a competition making em. Video shall be out soon.
We did plan for a dessert pizza, but couldn’t gobble up anymore, so we decided to rest and make it the next morning. This meant that the chocolate dessert-y pizza is our BREAKFAST. 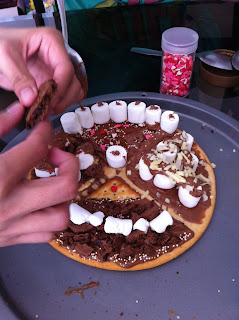 I divided the pizza base into 4 parts so all of us could ‘decorate’ our own. 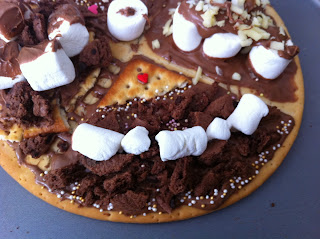 This is mine. It has melted chocolate, chips more, sprinkles, marshmallows, a piece of cracker and a single heart sprinkle. 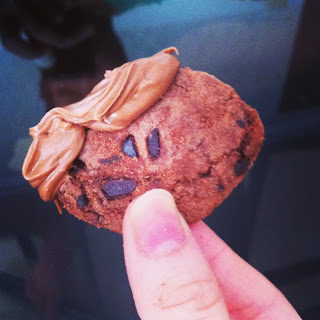 I didn’t use the whole single piece of chips more cookie, so I dipped the rest in melted choc and ate it just like that! Super duper chocolatey ! 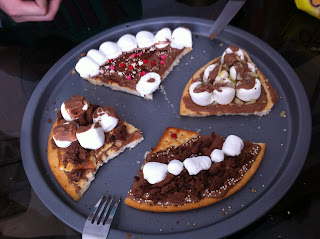 Our four piece after baking and cut. 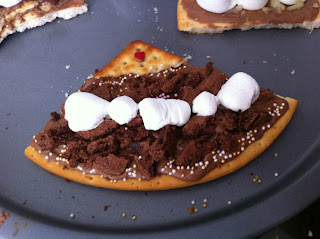 This is mine, the prettiest one (self proclaimed). 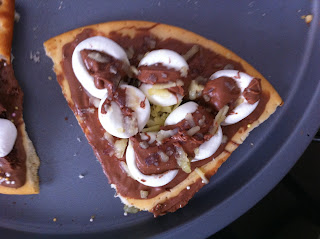 Justin Wong’s
What he did was he sat on the chair, said “Can we faster do, finish and eat?” then he slobbered on some melted chocolate, threw marshmallows on, slobbered more chocolate, sprinkle cheese randomly and went “DONE!” 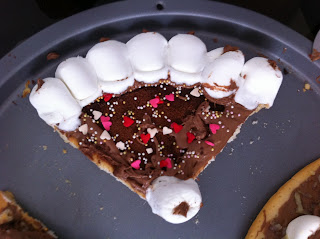 This one’s pretty too, I’d say. It’s done by the guinea pig aka Ethan Soh.
I’m surprised, he has good decorating skills
His piece is first coated with a layer of peanut butter, then another layer of melted chocolate to his pizza. Lastly, he added the marshmallows and sprinkles to finish up. 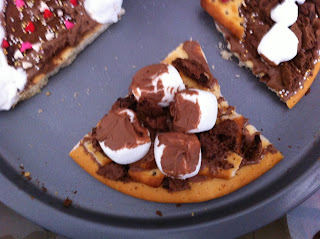 And this is Yap Yong Loon’s. His chocolate pizza looks somewhat similar to Justin’s doesn’t it?
Well, he did this with more care than Justin did, but it seems a little messy doesn’t it? Perhaps he likes the messy look? haha! His had crackers inside! And that makes it less sweet, which is good for non-sweet toothers. All the other ‘pizza’s were uber sweet! 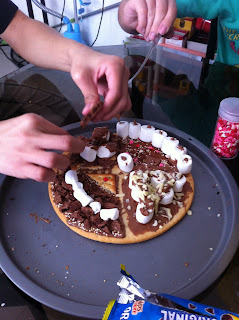 Want to make your own?
1. Have your pizza base 50% or 70% baked.
Why : If you don’t do so, and bake your whole pizza base together with the chocolate, your chocolate will harden instead of staying melted.

2. Melted chocolate is a must!

Why : It makes everything taste more chocolatey! And, acts as superglue.
How : Double boil it. Have a bowl containing chocolate placed inside another bowl. Boil some water and pour it into the first bowl (NOT containing the chocolate), and wait for it to melt. You can use a plate to cover the top so the hot air would be trapped and the chocolate would melt faster.
3.Gooey marshmallows adds a soft side to the pizza!
How : Place them anywhere on the pizza. When all decoration is done, place the whole pizza to bake for a while. Marshmallows will turn fat and their insides would be gooey! Just nice to munch on and enjoy!

4. Fruits!
Why : They’re healthy AND yummy! Most of them are sweet too!
Ethan wanted to add bananas in his, but forgot about it halfway. I think there’s a lot of fruits that would go well with this. Just do trial and errors. You can split the pizza into 4 like what we’ve done and add 4 different flavours!

5. Other things you can add to your dessert pizza
– Milo powder (They’ll come out crunchy)
– Sprinkles
– Chocolate cookies
– Chocolate pieces
– Corn flakes (Adds a crunchy side without adding too much sweetness)
– Crackers (balance out the sweetness of the pizza)
– M&Ms ! These would go great AND look great!
– Pretzel sticks
– Sugar (Sprinkle a tiny bit for some snowly/frosted effect?)
– ANYTHING THAT YOU CAN THINK OF ! (:

That’s all for today’s post! I hope you enjoyed it !