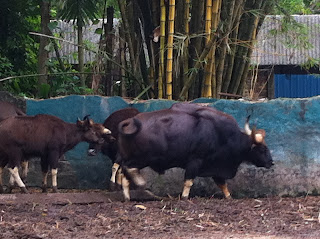 Yesterday, I cleaned this dude’s poop. Yeap! The dude in the picture above! It’s an Indian Bison. Well, a couple of friends and I, decided to volunteer in Zoo Negara to get some community hours. We need 10hours to pass our college course (Sunway College, CIMP). So, our job as volunteers are to feed the animals and clean up after them. 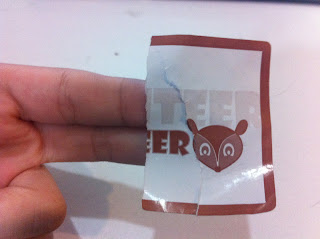 We were placed into groups o 5/6 and given a volunteer sticker each. It reads “Zoo Negara Volunteer”. Mine sadly, split into two right before we start work. I was transferring it from my right arm to my left (or the other way around). 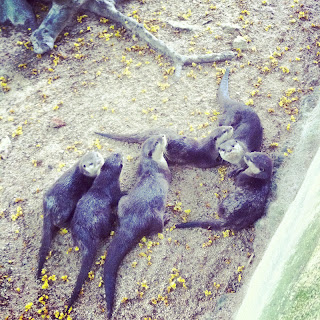 Check out the family of Otters. Aren’t they adorable? They all rushed over together when they heard the office’s (just beside) door close. I guess they were hoping for fish to snack on. 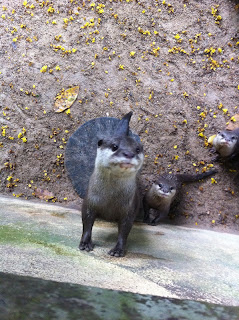 We went to different parts of the zoo and were split once again into smaller groups of 3. Xiang Ting, Shau Jin and Ling Wai were in one group, and Jen Sion, Jason and I in the other. My group was pretty fun, we got up close with the animals and sometimes we even get to pet them! The person in charge of us was Encik Wan, he’s a pretty nice guy. We found him where the deers are, and helped to pick up branches on the ground. The ground was filled with little round chocolates – their poop! They’d be really convincing if they were placed in a translucent bag on a table somewhere. Really! The surface was SMOOTH! Anyways, we fed the goats next and actually got to see the head(as in chief/boss) of the goats watching out for all the others and making them line up before charging for the food! Ain’t that cool? They literally lined up! I wish I had a video of it! We continued on feeding the deers, wallaby, kancil, bats (they were super cool! They were still awake and climbing about upside down when we’re in the area. I got to see them wrap themselves in their wings), Capybara (biggest rodent in the world), and the Indian Bison (the one in the first picture).
The Indian Bison’s habitat was the most disgusting one of all. We could smell the stench even from far. We stepped in with our boots (from the zoo) and a rake. The place was covered in old grass, poop and yellowish liquid (which probably was excreted from the Bison). Our job was to use the rake to pile up all the left over grass from the night before. We got to be careful not to drag their humongous poop along. The poop would be collected separately into a bin as the zoo wants it for fertilizer. After that is done, we got to carry in stacks of new grass (it’s pretty heavy) and spread it out on the ground. Interesting eh? Want to have a try at being a zookeeper in the future? 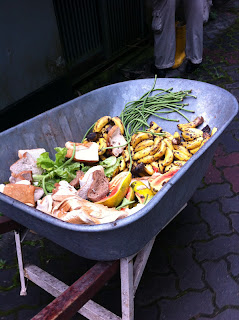 I got the experience of feeding the bears (basically just throwing these bunch of food into their cages.) too! Jason and I got the honor of pouring off the soup they call “Bear Sup” into the drain. The zookeeper only wants the meat, carrots and potatoes boiled in the soup. These were only given to the first two cages though. The rest only got the food in the wheelbarrow. Their diet consist of a mix of Bananas, Papayas, Long Beans, Cabbage, Bread, and Bread with Raisins. One particular bear loved the bread with raisins a lot and the zookeeper kept most for that specific bear. 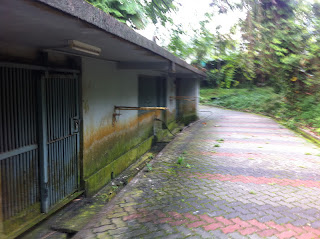 We weren’t suppose to take pictures while working, thus the lack of pictures in this post. At the very last breath of my phone (well, not really. I had 4%), I got this picture above. It’s where all the bears are kept. 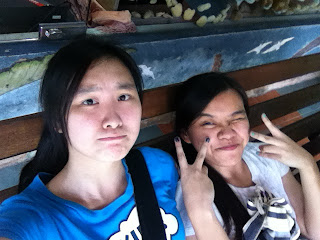 Well, that is all for our journey as a ZOOKEEPER! I wouldn’t say I’d like to work at the zoo or whatsoever, but it was a pretty great experience. At least now I would get to tell my kids : “You know, last time mama work in the zoo before!” (kind of) hee! Alright! Hope you enjoyed this post! Tata!
❮❮ Previous Post
Next Post ❯ ❯