I have been crafting quite a bit the past week as it was my holiday. I wasn’t suppose to be crafting though, I actually had mountains of homework but I couldn’t resist crafting instead. 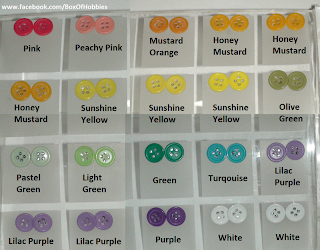 I made some more button earrings! Yipee! Aren’t they adorable? I wish I had more pinkish colours though. They’re available at BoxOfHobbies. Some of the colours are sold out though.
I also made a couple of rose rings! Check it out! 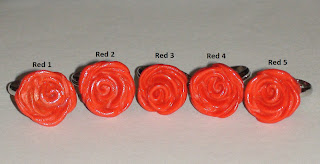 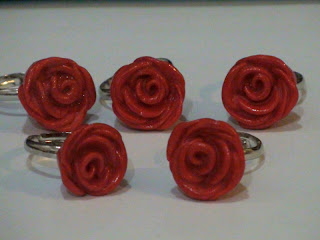 The first one is actually mixed with a bit of gold. Sadly, it doesn’t show much in the end. 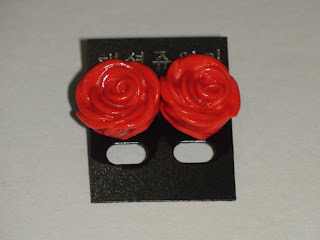 I made a pair of rose earrings too. I only made one because it’s pretty big. 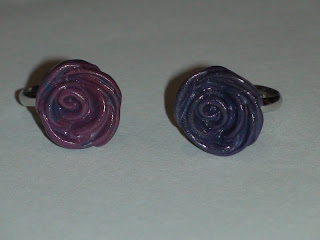 These 2 colours (purple & dark purple) are actually very nice. I love its picture in flash. I didn’t upload the picture in BoxOfHobbies though, as it really is much darker in real life. 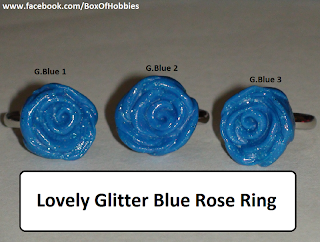 Glitter Blue Rose Rings! These are pretty nice, maybe cause my favourite colour is blue. hee! I might keep one of them for myself. Hmmm.. should I? I seldom wear accessories though. Oh well. Other than the roses, I tried something new today! Scroll down! 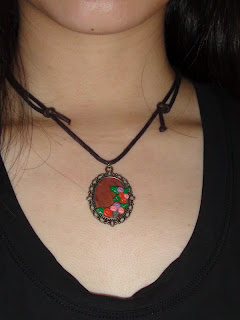 Isn’t it pretty? Some roses and a hint of vintage look. Lovely! I almost decided to keep it for myself. It’s sold now though. It’ll be meeting it’s new owner this Thursday! 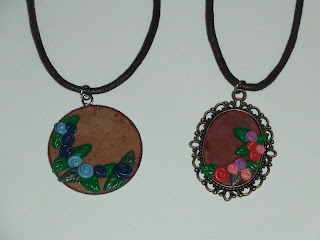 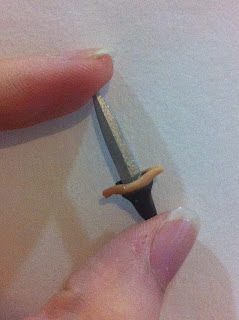 A very tiny sword that I made. Compare it with the size of my fingers! hee! I’m planning to add something else on. Stay tuned to find out! I might make some into keychains or so as well. We’ll see. It may be too tiny to be a nice keychain on its own. Well, that’s all for the crafty stuff!

There’s another thing I want to post about, and I shall call it “ThankYouForYou”. It’s about appreciating others, encouraging others and telling them what you admire about them or so. Even people that you’re not very close with. I like these kinda thing. It’s really fun! And it lets people know someone actually appreciates them for what they do! I actually posted something like that here before. Except, I never wrote the names then. I thought it’d be good to have their names this time. Then everyone can see how amazing they are! So, let’s start! This time, we’ll talk about gentlemen. 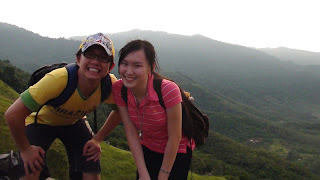 Andrew Lau
This guy here is my very first cell leader! (: I call him ‘Big Boss’! He’s super caring, super understanding and super GENTLEMAN! Mm.. this post is suppose to be me telling the person why I appreciate or admire them, but I think I’ve told Andrew the same thing tons of times already and now I don’t know what else to write. Guess I’ll just be telling you guys how awesome he is instead of telling him. haha! I think I wrote about the same thing for both his birthday last year and this year. I could still remember how he actually waited with my sister and I at City Harvest (old building) ‘s cafe. My mum got on the wrong road (highway) and took 2 hours before reaching church to fetch us. Andrew actually waited with us the entire 2 hours! Even when we say it’s alright and that he should go back first, he replied :”No, I have to make sure my members return home safely before I go back!” That really touched our hearts and is truly a CHCKL experience! I really thank God for placing him in my life. A leader I’d always look up to! (: 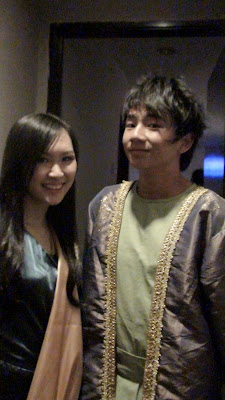 Wilson Thong
Hey Wilson! (: I just wanna announce to the world as well, that you’re super GENTLEMAN! 😀 haha! I don’t know you very well or so, but yeah. I’ve always heard about you fetching your members all here and there, and then saw you helping people carry their bags and all. That’s really nice of you. (: I remember on the last day of IO Camp 2011, I was carrying my luggage to the car. It was a little heavy but manageable. While carrying, someone asked “Need help?” and I replied “Nope. Thank you”. Right then, you came over and carried my luggage to the car saying “Aiyah! Don’t have to ask one lah! Carry only!” (Something like that) 😛 haha! I didn’t even had time to say it’s alright or so and my luggage is missing from my hands! It was really nice of you. And that time, I really really really don’t know you well. haha! It was a wonderful CHCKL experience! Well, that’s about it I guess. I really appreciate what you’ve done and how you are. Continue being an awesome gentleman! 😀

Hey Panda slash Mojojojo! (: I just wanna say thanks for being a great friend! I like how you always play along when I randomly say something or act something out. haha! It’s fun! Random yet fun. Mm.. I find you very sacrificial. Especially transport wise. I’m always hearing about you fetching people all around! And at times, if I’m not wrong, you even come out just because someone needs to get somewhere. Like that time I asked you how come you’re at church and you said Elaine needed transport, so you just followed her. What a gentleman! 😛 I was like ‘Woahhh..’ Pretty surprised. (: But it’s a good thing! And the other time where Aaron’s transport left and he didn’t know how to get back. Instead of going for supper which you wanted, you fetched him all the way back to KK and went home without supper. Awesome! Well, keep up the awesomeness, Panda! 😀 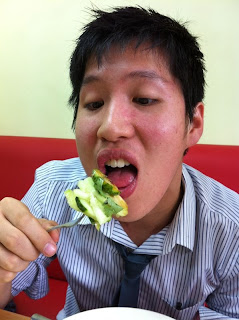 Dic Vinn
My dear brother Dic Vinn! Ever so healthy and smiley! hahah!! You’re an awesome brother and friend! Super gentleman as well but sometimes quite blur la 😉 hahah!!! I still remember the time where I posted on Facebook asking for transport to school. I expected someone from school to replied, but instead, you replied asking me the details (time,etc). Then, you added that you could fetch me if you can get the car tomorrow. You said that you could use another way to work and it’ll be on the way to fetch me! I was so touched. (: It was very very nice of you to do so. Really. Thank you so much for being such an amazing friend and brother! 😀 A true gentleman!

Kevin Rimas Lee
My super amazing, super awesome, loving and caring lion brother! Kevin Rimas Lee!! Rawr! (: Also known as a lion with a huge gentleman heart! Thank you so so so so so very much for always being there for me. You’re the one who helped me when I had so many questions in my mind about God and the Bible and everything. You taught me how to pray and always encouraged me. I still remember the time where you made me webcam with you and pray out loud every 2 days. I was quite afraid of praying in public and you did that to help me with it. I’m so thankful that God placed you in my life. Really. Though you’re in Philippines now, you’re still helping me so much! Especially with my evil IB homework! (: I really really do appreciate it! Thanks for always supporting me (& BoxOfHobbies) and believing in me. haha! You’re the best! 😀

Brandon Chin
Mister Brandon Chin! Another gentleman I’ve came to know! I find that you’re very sacrificial. You’re always offering to fetch people around, even if it may not be on the way. And you’re always willing to do so much more. Always. (: I’ve noticed as well that you ALWAYS open the car door for girls. Usually, a guy would just open the door for another when he’s actually passing by their door, then go to the driver’s seat. They don’t purposely walk to the other side, open the door for a girl, close the door for them, and then walk back to the driver’s side of the car. I remember you did that though, on the day where we dropped by JLGuitarCollection at Business Centre. I was quite surprised cause it’s actually my first time seeing a guy do this. I’ve had guys who opened car doors for me before, but not purposely walking over to do it. Thank you! (: Other than that, there was once, sitting on the driver’s seat, you even put your hand over to the back and tried opening the door from the inside of the car for me. Also, thanks for fetching me from home to college when I needed transport then. 😀 Really really appreciate it a lot!

That is all for today peeps! I had a really great time doing this post and I hope you enjoyed reading it! Keep smiling, laughing and having a blast! Bye!