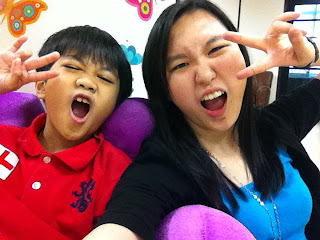 Rawr! That boy in the picture is Ryan Lee. Ain’t he adorable? There was once where I sang in front of a few people (including him) and he said my voice was perfect though I stammered due to shyness throughout most of the song. So touching to hear a kid say that. He said : “Wahh. So perfect eh the voice.” *melts*
Anyways, today’s post – as the title stated – would be Beautiful 2012. This year has been an amazing year for me, though it’s only January still. Here’s a few small glimpse of my wonderful 2012 life so far.
First of all – New Year’s Eve, where was I? I was hanging out with a bunch of people in ss15 McD. Yeap, ss15 McD for New Year’s Eve. How could that be so great? Well, I met tons of new friends and we all played boardgames there. It’s a simple way of celebrating, not much of a countdown, but it’s still as fun. I tend to feel very happy and excited meeting new people. It’s just great to have new friends! Few days after, I had my very first movie night with the usual group (Justin, Yong Loon, & Ethan Soh), but this time with another guy named Jeremiah whom I met during Chrome Heart practices.

*Note : If you missed Chrome Heart, be sure to borrow my dvd and mark out Easter 2012 on your calender! Really, it’s superb!*
I was really excited for the 5th and 6th of January. You know why? Well, it’s my college orientation days! I was really excited for college then and was jumping about everywhere. It may not be the most interesting orientation ever, but I still had fun. I made new friends and met old friends too! We even had activities on the 2nd day – more friends to meet! It was great! Just lovely. On the 6th, I went to IO CAMP 2012 right after college orientation and everything. I almost didn’t plan to go, but am glad I decided to go in the end. My team was called Youtube and it was built up by amazing individuals (Jeremiah Vun, Kee Yew, Chin Soon, Chen Han, Ben Pang, Wennishe Wong, Amy Chan, Evangeline Ang). This was what happened : 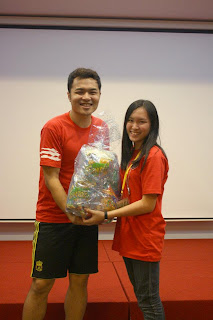 My Youtubers and I won first place overall! We even got best drama – which we planned in less than 30minutes time. I was really surprised and am very very proud of them, from the bottom of my heart! You could even see the joy radiating from their faces where their smiles grew from one end to the other. On the following Saturday, a surprise was given as we had our reunion. 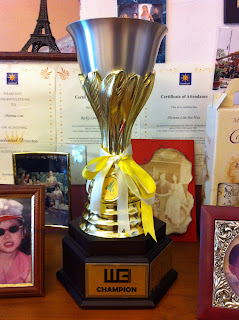 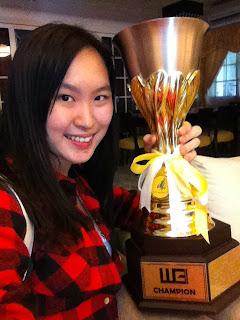 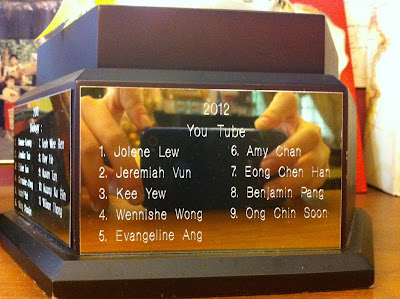 A trophy was passed down to the winning team’s team leader (me) to be kept and passed down to next year’s winning team. It has all the winning members’ names engraved on a gold plate. This year, the trophy is 2 years old. And it’ll be used for 5 years in total. I’ll continue on with IO CAMP 2012 stories in another post (after CNY I suppose). So stay tuned! Other than those above, I finally got to spend time with Ling Wai on a secret crafty project! We’ve been talking so much about craft before on Facebook and the time has finally come where we got together to take action! It’s a secret project for now though, you’ll be updated soon. No worries. The whole process in trying it out to see if it works was fun.
On 17th January, my heart was out of control, jumping all around with a full bar of energy! It’s the day where tickets for WongFuProductionsKL is being sold at Taylor’s Lakeside! I have classes and couldn’t get it myself. So I passed some money to one of my friend from another college in the morning, and he helped me get tickets for both him and I. I was in college when my friend called me. He told me that the queue was extremely long (I knew he had classes at 11am, and it was already 10:50am+ at that time) and they are planning to sell Feb 4th’s tickets today as well. That everything would be gone today and that’s that. My friend also said that the VIP tickets are selling out real fast, and he’s not sure if he could even get the normal tickets. In my mind, I was pretty sure it would be VERY hard to get the tickets, and it’s pretty possible that I couldn’t get it too, so it wasn’t really a surprise to me that he said he may not be able to get it. I just told him it’s okay then, that he should better hurry off for classes instead of waiting in line. Then, all of a sudden, he said “Just kidding! We’ve got 2 VIP tickets for WongFu!”. My heart burst in joy and I couldn’t believe it. I kept asking him if it was true, that he wasn’t kidding. And he really wasn’t! So yeah, WongFuProductions, HERE I COME! 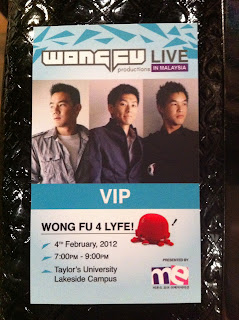 I’m so excited! I can’t wait. I want to get an awkward rhino too! *Jolene Lew is teaching her money to fly in January 2012. Hopefully they’ll come back to stay February onwards*
And that, is pretty much all I have to say about my Beautiful 2012 so far. January is lovely. There’s still something more actually. Something that is really really wonderful and pretty amazing, but I’ll save that for next time. 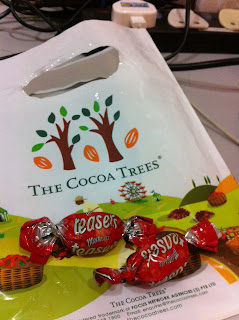 One of the chocolates that I love because there’s tiny round biscuit things inside. Tiny round ones, not one big round biscuit. It’s covered in milk chocolate. Too much of it at a go would be too sweet for me, but I still like it. I couldn’t find it anywhere that sells it separately till now – The Cocoa Tree. 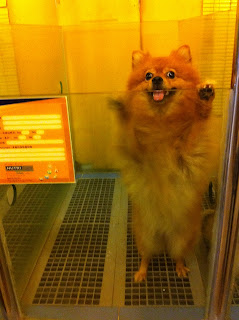 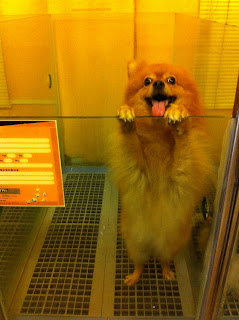 Well, that is all for today’s post. I’ll be heading back to my parents’ hometown in a bit. Here’s Roxy checking in at her hotel. That’s all! Bye people! Have a wonderful day tomorrow and a lovely Chinese New Year with your beloved family! Smile always, as a smile could always help brighten up other people’s day! You’ll never know. Bye, lovely people who reads this blog!
❮❮ Previous Post
Next Post ❯ ❯