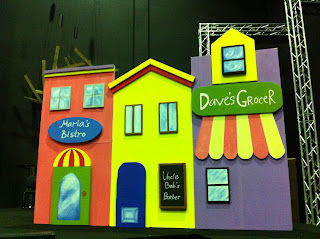 What’s that? It’s the props for Emerge Junior 2011 ! A kids event held by City Harvest Church filled with activities, games and of course, workshops! Definitely something worth going! The theme this year was “Not just a kid!” It was held on Friday to Sunday (The one that just passed). 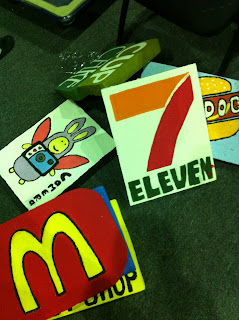 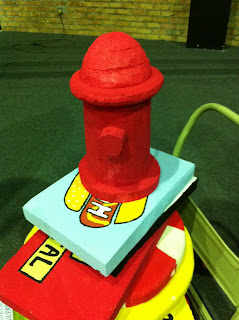 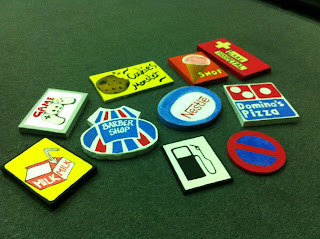 We made all these awesome sign boards to decorate the hall! I love how they all look! They’re all so realistic and they’re all made by us! Yay! My favourite among all (I’m not sure who did this) was : 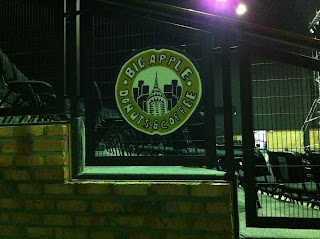 THE BIG APPLE SIGN! They were one of our sponsors for this event.
Anyways, the story of Emerge Junior 2011 begins here! It’s going to be a pretty long post, so grab your snacks, drinks and sit tight! Enjoy reading!
DAY ONE
8am and the teachers + volunteers arrived to gather for a briefing before everything starts. There will be games by Mary and Mei Ling first, then continued by Praise and Worship. We call this Session 1. I was one of the person dancing for Praise. It was really fun and I enjoyed it a lot! I got to act all silly and jump around like no one cared! Especially loved the song I’m Not Ashamed! Anyways, we were supposed to put on some make up, but I didn’t know how, so the beautiful Jen May helped me! And I loved it! My face was super shiny! 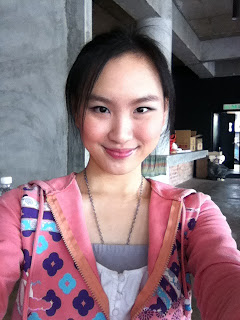 I went into the toilet to have a look once it’s done. One of the kids – Jeannette, saw me and tapped my hand. I looked down at her and she didn’t say anything, but looked up to me with her huge eyes and mouth wide open. She was so cute! I asked her if it’s nice and she nods her head slowly with the same expression. So cute! My heart melted! 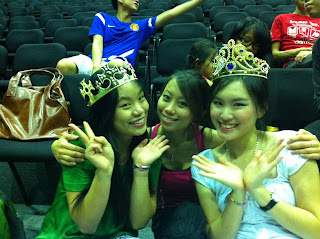 These two here are the Praise and Worship leaders! *clap clap* They did an awesome job!
After praise and worship, we had lunch and then workshops. The children would be going to different workshops at the same time, then they rotate to different venues. There’s soccor/accessories making where the boys go to soccor and girls to make accessories, baking, dancing, and a science project which I found pretty interesting! I’m sure the children did too! I was in charge of the accessories workshop so I could take pictures of it. I couldn’t get the rest as I was here the whole time the workshops were running. 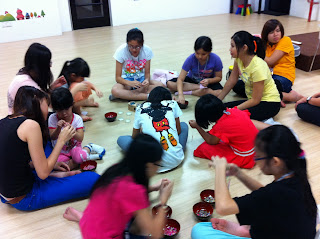 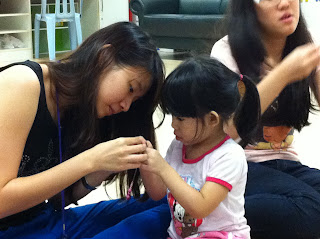 And I made this for myself ! I love rainbows! I’ve been wearing it since it was made! 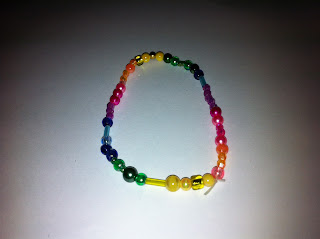 The beads were put in at random, so long as the colours followed the rainbow when they’re all together. I didn’t even count to make each colour have the same amount of beads. I like it that way. Lots of kids did theirs with tons of colours as well, some looking very tropical. I like those. Some had the same few colours repeatedly and others did theirs with totally random beads. They all turned out beautiful. Creative children! When the workshop ended, a number of kids in my workshop said they wish they had more time to make more. I was quite happy to hear that! They then went to the cafe for tea break, and then to the hall for Session 2. We had praise again, then lessons carried out. Dini taught the kids about the story of Queen Esther in the bible. 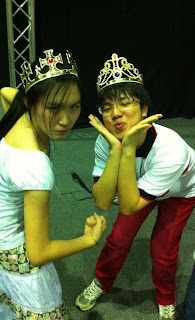 I was acting as Queen Vashti – the one before Queen Esther. And Richard was King Xerxes. Mei Ling acted as Queen Esther. I don’t have a picture of her though. The picture above was taken after the lessons. We swapped crowns and I acted as a strong king while Richard acted as a.. urmm.. well.. a beautiful queen? I didn’t like how I looked here, my hair was a mess, but I posted it because it’s funny! That’s all for Day one!
DAY TWO
Telematch was the first activity on the list! Tons of games were prepared for the kids to earn Jellies! A jelly = 100 points. They would be rewarded to a group as the kids gain points! At the end of the event, the jellies in their team would be split among them. 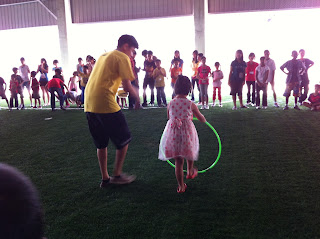 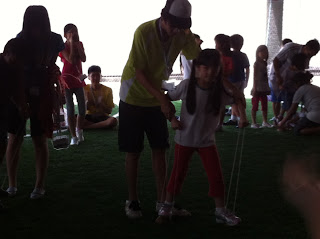 A couple of games were not played due to lack of time though. One of them was the game involving water balloon. Awwwh. I really wish to see the kids play that. It would be fun. Anyways, after the telematch, the kids had lunch and headed on for workshops. They were split into 2 big groups. One went for candle painting, and another went for keychain making (I was in charge of this workshop). I taught them to make keychains with hama beads, like these : 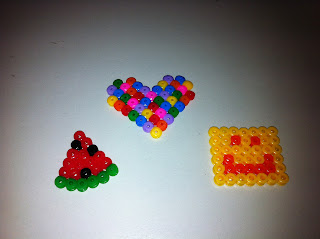 It went well at first. Chia Huey and I were ironing the pieces together. In a while, the kids crowded around with their masterpieces and the place had a keychain flood! The workshop could’ve been better. I didn’t think we would need tons of iron. After workshop was the Emerge Jr Got Talent, and then the carnival – UNIQ. I was supposed to help Gladys with the Face Painting booth during the carnival, but couldn’t because we were still ironing the keychains together after the kids left for Emerge Jr Got Talent. Wish I could have a look at what they did for Emerge Jr Got Talent! After the carnival, some of the kids continued on for service. Pastor Mike came down and he was amazing! Like really really amazing! I felt like crying somehow. Before the service started, there were pre-service games hosted by Anthony and Gladys. The children get to win presents for questions they answered correctly. They win even if they haven’t said a word. It’s really funny. Tons of kids rushed out trying to get the presents. There was one question where they asked “What do you call your father’s father?” and all the kids said “Grandfather” till one girl – Shekinah came out and said “Ye ye”. Everyone in the hall laughed! It was really cute! 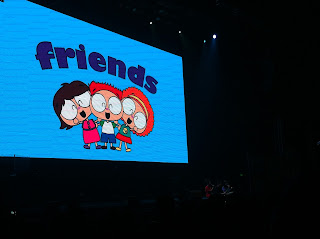 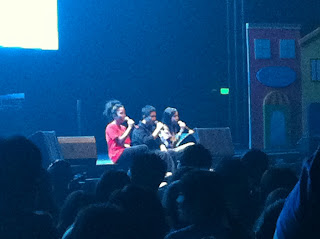 A few kids performed after that. 3 of them in the picture above sang Bruno Mars’ “Count On Me”. They were pretty good! One kid played the a song from Pirates Of The Carribean on the piano, and a small group of kids danced on stage in front of tons of people! They were so brave and so adorable! Me being the person I am (having motherly instincts), had tears in my eyes. I am so proud of them all!
As for DAY THREE of Emerge Junior, we all had the service first, then we had the Grand Finale where balloons fall from the ‘sky’. When they come out from the service, they continued playing around in the carnival set up for them. The event officially ended at 3pm. It was a great experience! Tiring, but the children’s smiles are all worth it!

Here are a few more photos we took : 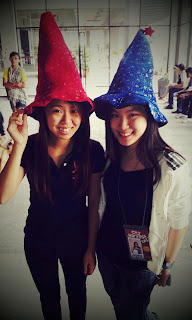 Elaine and I in our magic hats! 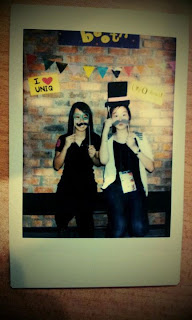 We grew mustaches and turned into guys! 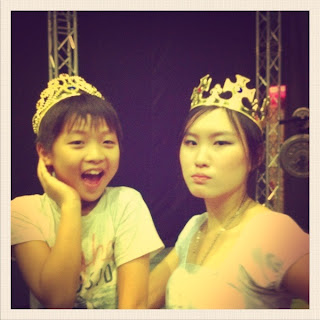 That little boy – My princess 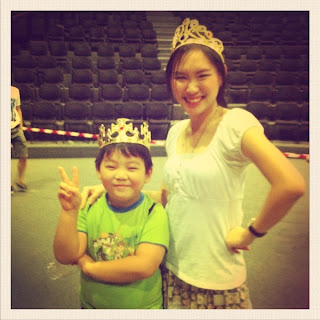 That little boy – My king 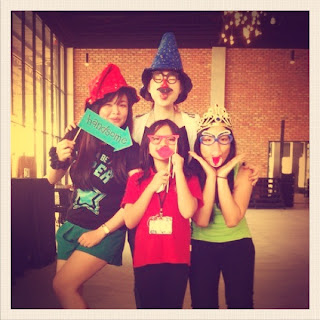 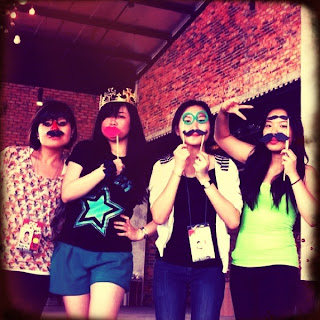 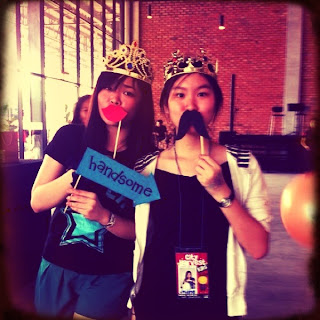 Jen May and I. 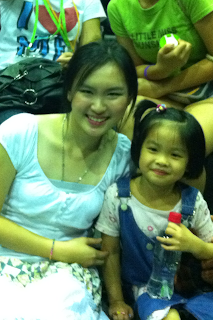 And this little girl’s name is Amy.
That’s all! Bye!!! Have a great day!