It’s an early morning kinda day! 730am was the pick up time to go SKYDIVING! Woohoo!!
I’ve always wanted to go skydiving, but like.. I never thought it’d be when I’m 22! I thought I’d be older by then.

Out the door we went with our laced up shoes (this is a must, so make sure you bring them if you plan to go skydiving). They picked the 4 of us and gave us some forms to fill in the van. There was an extra option to pay $20 for insurance, but none of us took it. Upon reaching the venue, we were greeted with more forms to fill! Life is no joke okay. Got to fill them forms up!

We were introduced to our skydiving instructors, mine being Ken – 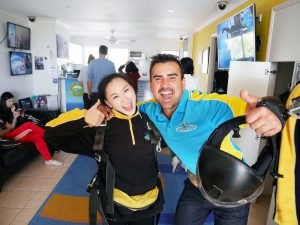 Ken has worked with Gold Coast Skydive for about 4 to 5 years now and was previously in the army. Jumping off planes is pretty much like drinking water to him (He probably even skydives way more than drinking water). He does it several times each day and earns money falling down the sky.

We put away our bags in a locker, got dressed in their suits and left in the van to another destination. We got on the plane there and flew up about 12,000 ft into the sky. It was freeeezing cold! There were 5 of us (one more lady from sg) and the sequence to jump was Gu, Brian, Me, Sg Lady and Elaine. Gu and Brian sat closest to the open door.

Everything happened pretty quick. We got our eyewear on, Gu went off, Brian went off, we scooched closer to the door, did exactly like what we were told to during briefing, and off we went! The wind pretty much slammed into my face. It was so strong! It wasn’t painful, just really really strong. You don’t feel it as strongly when you’re sitting by the edge of the door.

We did a loop-d-loop in the air! I couldn’t see much of it, but I felt the turn! Pretty cool! And I have some photos of the dive which you can check out here!

So… for this whole trip, I tried to get the 4 of us involved in a music video thing. I thought it’d be cool to do something for it while skydiing.. So, while falling from the sky, I attempted to sing/lip sync. It was horrible. Don’t ever do that. Ha ha ha. 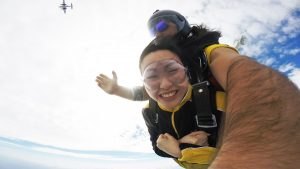 The parachute was released and I felt a little jolt pulling you upright. (^Spot the tiny plane too!) Then it became pretty peaceful. The wind seems to have calmed down (nah, it was just not slamming into my face anymore) and we stayed up there for a bit. Ken let me try steering the parachute for a bit, teaching me to go left and right. Then he taught me how to land properly with a few practices in midair. Basically having your knee up and then feet up as you’re reaching the ground.

Everyone has already landed and I was the last one to get down. As I landed and got detached from the parachute etc, I bent down, grabbed some sand and told my instructor
“LOOK! SANDDDD!!! I’M ALIVE!!!” Hahahaha. He laughed and called me “Crazy Girl”

We went back to the skydiving centre and waited for the photos and videos (We took the photo+video package. Paid separately). Our instructors also came back with a little gift for us! 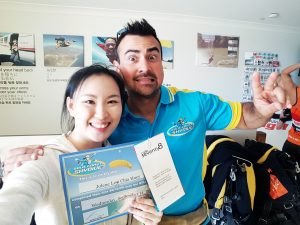 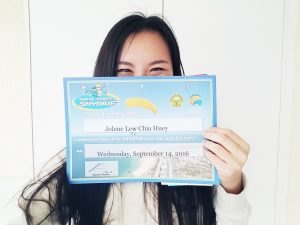 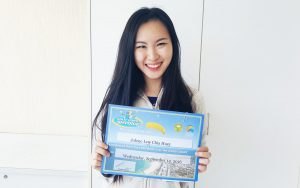 Yayers! I’ve got my cert!
*Check out my skydiving photos & get the company’s details here!*

We also got a voucher for 20% off at a cafe downstairs – Cafe Seventy8, which we dropped by for lunch.

Up next was surfing. We had some time left, so we headed home to change before going to Nobby’s Beach for it. We took Uber to Nobby’s and couldn’t seem to locate our surfing coach. 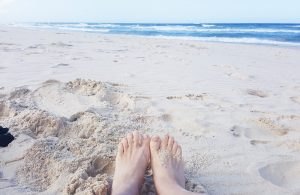 Apparently we had a little miscommunication with them and so our late afternoon was spent playing frisbee and just freezing to death on the beach instead. It was extremely cold. We kinda thanked God the surfing didn’t happen else we’d turn into live human popsicles! We had time, so we walked around the streets nearby. 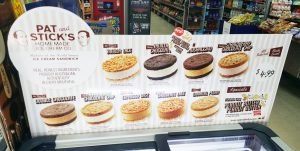 Found this and got the salted caramel one to try. It was yummy! Pre-packaged in a simple plastic wrap and easy to eat. The cookie is tasty too! Elaine found a similar one in Miami Marketta which we visited right after. 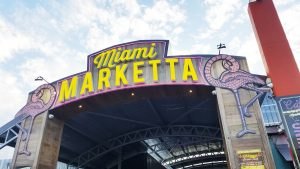 We found this spot by accident. I was looking through google maps and noticed the name being some sort of market. Googled for more info and found out it opens at 5pm! Just nice. By the time we walked there, it was pretty much on the dot! 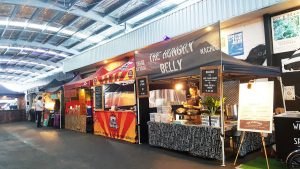 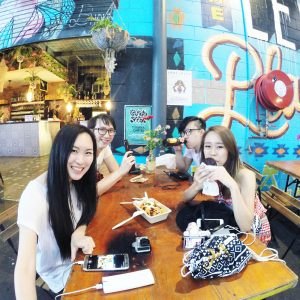 It’s a small market hidden in a alley kinda thing. The walls had graffiti and even the toilet cubicles had some sort of drawings on them. We almost had dinner there, but decided to just settle with a snack – Nachos, and head back to Surfers Paradise to dine in Hurricane’s. Hurricane’s Grill is the place Gu and Elaine has been talking non-stop about since BEFORE we came to Gold Coast. They’ve tried it at Sydney once and fell in love – not with each other, with the food I mean.

In the car (we took Uber again), we noticed that there were stalls set up by the walkway beside the beach. We weren’t all too hungry, so we walked through the markets first. There were so many things to see! From food, to art, to performances, toys, costume headdresses and lots more! No one bought anything though. We headed back to Hurricane’s for our late dinner and home right after. Another exhausting day.